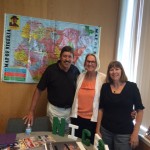 From America we set off with expectations and ideas that were quickly squelched.  We thought Nigerian life would mimic our sheltered American existences.  Americans MUST have kitchen appliances, good paved roads, uninterrupted utilities and internet, well stocked grocery stores and every other convenience of our everyday life.  But we found no appliances, potholed and muddy roads, intermittent utilities and internet, street/bazaar vendors, garbage routinely piled on the sides and median of the roads, constant military checkpoints.  AND THAT WAS THE FIRST DAY.

But despite all that, all the people we encountered were friendly and loving, helpful, kind and generous.  The poorest of the poor, the homeless in the IDP (internally displaced persons) camps have hope for better days — so much so that the light of God shines in their entire faces and actions.  The Ekklesiyar Yan’uwa a Nigeria (EYN) staff and pastors all were hopeful that we would carry their stories back to the States for all to know.  We also met with leaders in the community and heads of non-EYN organizations who befriended us and talked about their efforts and hopes. 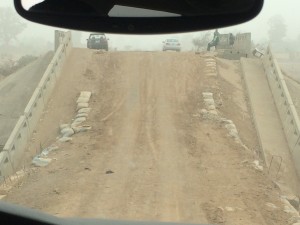 Travel throughout Nigeria was difficult but we had fantastic drivers who avoided (as much as possible) potholes and road blocks and who deflected the military checks.  Evidence of Boka Haram (BH) invasion and Nigerian military actions were still evident on every road.  One specific bridge had been destroyed to halt the BH and to cross it we went down and back upward on 90 degree angles.  Markus jokingly said we should walk the bridge and I took him up on that challenge.  As I got to the bottom of the rubble and started up the other side, I had such a feeling of wonderment, scare, etc.; and I think I must have felt the same as the Nigerians as they first crossed that bridge. 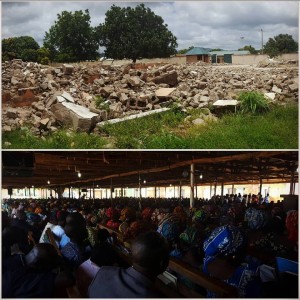 Before the BH, the church at Michika had had three services on the first three Sundays of the month with one combined on the fourth for a combined total of 3000 members.  BH waited until the benediction on that fourth Sunday before shelling the church.  Now the congregation is reduced to 2000 who meet in a tent next to the bombed out church building.   We swore we could still smell the ashes of the burned books in the library. Everyone is looking forward to the reconstruction of the church as they prepare to rebuild in the next few months (drawings of the     plans are posted on the walls). We also visited another damaged church and spoke with the two pastors.  They are holding the congregation together but have no idea when their building will be repaired.  This apparently is the norm for many of the destroyed churches. Check out  http://www.brethren.org/nigeriacrisis/action.html to see how to join a workcamp to rebuild churches in Nigeria.