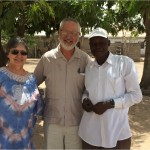 Several days ago during a break at Majalisa, a pastor handed Norm a picture of 8 members of his congregation who were killed by Boko Haram, along with pictures of his church and parsonage which were also destroyed last year.  We had listened several weeks ago as he shared some of his experiences, but we had not found the time to return for a second visit.  He wanted us to see, as well as to hear, of his congregation’s suffering.  He related that the EYN Nassarawo church had outgrown its facility, so a new church and parsonage were built just 1 year prior to the destruction of all three by the Boko Haram.

Nassarawo church members who were killed

Norm asked him if he found it hard not to hate those who caused the damage.  Without hesitation, he responded, “No, the Bible makes It clear that we are to love our enemies, so I cannot hate them.”  He went on to tell that the 2 men who destroyed the structures were found to be his neighbors.  When the police captured them, they asked him “Pastor, what shall we do with these men?”  He responded that as a Christian, he did not want the police to kill them, but rather to set them free.  He noted that “even though the two are still Muslim, I know that Islam does not condone such violence.  Boko Haram is just a fanatical, fringe hate group that does not follow God.”  Later one of the two helped to clean up the burned buildings.  Our EYN brother said “Remember, God CAN turn ANYONE around.”  In a sermon at Majalisa, we were reminded that even the apostle Paul started out as one who hated and killed Christians!  There is always hope for each child of God, so we must be careful not to hate them. 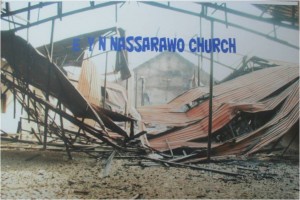 One thought on “Pastor puts Peace in Practice”