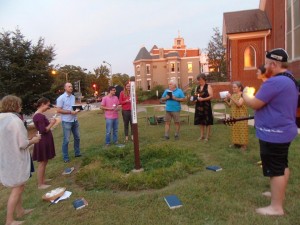 On September 21st, brothers and sisters gathered all around the world for International Peace Day. At  the Washington City Church of the Brethren, a small community gathered around the peace pole in prayer. Josh Ammons delivered this reflection.

I was asked to speak on the refugee crisis on the International Day of Prayer for Peace. “A refugee is someone who has been forced to flee his or her country because of persecution, war, or violence. A refugee has a well-founded fear of persecution for reasons of race, religion, nationality, political opinion or membership in a particular social group. Most likely, they cannot return home or are afraid to do so. War and ethnic, tribal and religious violence are leading causes of refugees fleeing their countries.” Europe is facing the largest numbers of refugees since WWII. Most American refugees come from Africa and the Middle east. There is likely no group of people who need peace greater than refugees. Humanitarians of all types have great concern for the refugee crisis, but as Christians our concern for refugees is a part of our anthropology.

Many scholars argue that Jesus himself was born as a refugee. As Thomas Merton so eloquently writes:

“Into this world, this demented inn, in which there is absolutely no room for him at all, Christ has come uninvited. But because he cannot be at home in it, because he is out of place in it, and yet he must be in it, his place is with those others who do not belong, who are rejected by power, because they are regarded as weak, those who are discredited, who are denied the status of persons, tortured, exterminated. With those for whom there is no room, Christ is present in this world.”

Jesus instructed us to care for the refugees both by his words and deeds. In Matthew Jesus says:

“Then the King will say to those on His right, ‘Come, you who are blessed by my Father, inherit the kingdom prepared for you from the foundation of the world. For I was hungry and you gave Me something to eat, I was thirsty and you gave Me something to drink, I was a stranger and you took Me in, I was naked and you clothed Me, I was sick and you looked after Me, I was in prison and you visited Me.’

And the King will reply, ‘Truly I tell you, whatever you did for one of the least of these brothers of Mine, you did for Me.’”

Jesus spent much of his time on this earth healing the sick, feeding the hungry, and spending time with the downtrodden of society. But many claim that the refugees are not just poor, sick, and hungry, but also a threat to our society. Jesus’ life shows examples of how we should treat those who threaten to upend our way of life in his final miracle. Jesus had just been betrayed by Judas, and the high priests were taking Jesus away to what would later be a death sentence. Simon Peter was likely overcome with fear that the life he had known as a disciple would be forever changed. He probably felt the need to defend the Jesus that he loved by any means necessary. In the heat of the moment, he struck the high priest’s servant’s ear with a sword in defense of Jesus. This man’s name was Malchus and we would become the last man to experience the healing grace of Christ before his crucifixion. Jesus healed his ear, and in this moment he showed us how we should treat those who we are afraid of. Historians say that Simon Peter died as a martyr for a faith that instructed us to love even those who we are most afraid of. As it states in Matthew:

“You have heard that it was said, ‘Eye for eye and tooth for tooth. But I tell you not to resist an evil person. If someone slaps you on your right cheek, turn to him the other also; if someone wants to sue you and take your tunic, let him have your cloak as well; and if someone forces you to go one mile, go with him two. Give to the one who asks you, and do not turn away from the one who wants to borrow from you.

You have heard that it was said, ‘Love your neighbor and hate your enemy.’ But I tell you, love your enemies and pray for those who persecute you, that you may be sons of your Father in heaven. He causes His sun to rise on the evil and the good, and sends rain on the righteous and the unrighteous. If you love those who love you, what reward will you get? Do not even tax collectors do the same? And if you greet only your brothers, what are you doing more than others? Do not even Gentiles do the same?

Be perfect, therefore, as your Heavenly Father is perfect.”

Much debate can be had over issues of national security, but as Christians we are called to walk through our fears with faith in God’s teachings. Whether or not refugees are viewed by us as friends or foes, the Gospel commands us to treat them as brothers and sisters. The love Christ calls us to is not easy, even for great Christians like Simon Peter, but we serve a Powerful God who restores us when we repent and turn toward the love of Christ.

Prayer for refugees and victims of war

no one is a stranger to you

and no one is ever far from your loving care.

In your kindness, watch over refugees and victims of war,

those separated from their loved ones,

young people who are lost,

and help us always to show your kindness

to strangers and to all in need

Grant this through Christ our Lord.