The following is a statement from Nathan Hosler, Director of the Office of Public Witness, given at a Congressional briefing entitled, “Nigeria after the Chibok Abductions: An Update on Human Rights and Governance.” The briefing took place on April 13, 2016, the day before the two year anniversary of the Chibok abductions.

The Church of the Brethren is a Protestant denomination and is, along with the Mennonites and Quakers, a Historic Peace Church. In 1922 the first workers from the Church of the Brethren in the United States arrived in Nigeria and immediately traveled to the northeastern part of the country. Since we are gathered today with particular focus on the abductions from Chibok two years ago it is also important to note that the Brethren have been present in Chibok since 1937 and established the first school in either 1939 or 1946 (there are different dates recorded). Additionally, not only was the school where the abductions took place founded by Brethren before being a government school, but the Church of the Brethren in Nigeria (in Hausa Ekklesiyar Yan’uwa a Nigeria—EYN ) reports that a majority of the girls kidnapped two years ago were Brethren. As we consider the 2nd anniversary of these abductions it is vital that we remember the larger regional context, insecurity, and displacement. 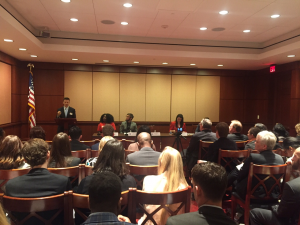 In January this year I traveled to Nigeria and into the northeastern region. Though I had worked with EYN doing peacebuilding work in northeast from September 2009 to December 2011 (which was about a month after the first Boko Haram attacks until the situation began to get dramatically worse), I had not returned until earlier this year. On my trip at the end of January I traveled by car from Abuja through Jos and Bauchi to Yola, the capital of Adamawa state. We then continued north to Mubi and on to Lassa which is in southern Borno state and not far from what is still said to be a “no-go” zone past Michika. I will make several observations based on this trip and the US Church of the Brethren’s work with EYN to address the ongoing crisis of displacement and insecurity.

1. Though many more people had returned than typically reported, security and food security was still tenuous at best.

I observed that at first look things appeared more normal than I expected, however the security situation remains tenuous with many smaller attacks going unreported. Additionally, reporting, verifying, and predicting the number of persons killed, the relative security of certain villages, and general safety is difficult because the area is difficult to access. Though many people have returned, the legitimate fear of attacks continues to disrupt schools, markets, farming, and life in general in a region that had poor development indicators even before Boko Haram arrived. Despite improved security in many areas and the waning attention to the crisis, it is imperative that the Nigerian government and international community expand relief, education, and peacebuilding efforts.

2. Numbers of killed and displaced are likely higher than official reports.

Many who watch Nigeria, do relief work, or attempt to report on the situation say that the officially reported numbers are doubtful. The Church of the Brethren in Nigeria reports that at least 10,000 of its members have been killed and 1,668, or 70%, of its church buildings have been destroyed or abandoned. Boko Haram largely (but not solely) focused on government structures, churches, and Christian communities early on in the insurgency, but has increasingly become more indiscriminant, targeted mosques, Muslim communities, and public spaces such as markets. The massive scale of abductions and deaths as well as displacement and destruction of homes, infrastructure such as bridges, government buildings, places of worship, and schools demand sustained attention and support.

3. Peacebuilding between religious communities is imperative.

On my trip earlier this year I observed expanding efforts in trauma healing and continued interfaith peacebuilding efforts. While working in Nigeria from 2009-2011 I focused almost solely on peacebuilding efforts, especially in equipping the Nigerian Church of the Brethren to engage in multiple levels of peacebuilding with a strong emphasis on interfaith peace efforts. One of the efforts came to be called CAMPI, Christians and Muslims for Peacebuilding Initiatives. This interfaith effort sought to build stronger inter-community relationships and capacity for peace as interfaith relationships and trust weakened from the ongoing crisis in Jos, political violence around the 2011 federal elections, and the resurgence of Boko Haram after the initial government clamp-down on the group. Upon returning I had hoped that religious divisions and tensions would have decreased since Boko Haram is obviously also targeting Muslims. Instead, I heard of deep distrust. Even if Boko Haram were to be defeated tomorrow and the girls from Chibok returned, support for peacebuilding efforts would remain vital for a sustainable peace.

Critical to this work is trauma healing, trust building, and reintegration of those thought to have aided Boko Haram as well as the imperative to reintegrate and care for women and girls who were abducted and then returned through escape or military intervention.

4. Coordination on humanitarian assistance and longer term development is essential.

Some of the hardest hit areas are in southern Borno and northern Adamawa states along the Cameroonian border. I visited a non-registered school in Lassa in southern Borno State, not far from Chibok and areas still considered “no-go” zones. Lassa had been attacked twice near the end of 2014.  Even before this crisis, which started in 2009, there were millions of children out of school. In many of these areas, kids who were in school have been out for at least 2 years. At the school in Lassa, which is called “Education Must Continue” there were less than 20 teachers over 2000 students. They were meeting in nearly destroyed police barracks only partially covered by roofs and outside the buildings under trees. The teachers were essentially volunteering and working without any books, paper, desks, or chairs. While these efforts are remarkable, they are only the beginning and cannot be sustained long-term. Greater coordination between international NGOs, the UN, international community, and Nigerian government is necessary. While in Lassa I was escorted around town by local vigilantes to witness a destroyed large Church of the Brethren building, a heavily damaged seminary, and a partially destroyed hospital. Though attacked more than a year earlier and though the hospital had been in communication with the government, to date they had received no support.

2 thoughts on “Two Years Since Chibok”