The logistics of each food distribution are different but they are never easy. Each trip is also combined with other business and visits to family and friends. Roads are filled with potholes and military check points. Purchase of the food and getting it ready for distribution are time consuming. 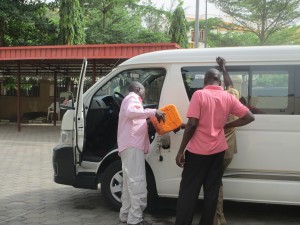 We left for Yola at 7:30 in the morning.  Many gas stations were closed because they were out of gas. The few that were open had long lines of cars waiting to get gas. Rather than wait up to a few hours in line for gas we got some along the road from an individual for over double the normal price. This is referred to as black market gas.

for the distribution. The banks in Mubi are all closed, as the Boko Haram destroyed all the bank buildings when they captured the city in 2014. We spent an hour at the bank, stopped by the land bought for the Yola Care Center and then went to Mubi where we met Rev Amos (materials coordinator for the disaster team) and gave him the money.

We then visited the EYN Lokuwa Church on the Adamawa State University campus. Rev Yuguda (manager of the disaster team) pastored this church at one time. Boko Haram burned the church last year when they overran the town of Mubi. The walls of the church building are still standing, but no repairs have yet been made. A temporary structure has been roofed where church is now being held.

We spent all day in the market buying rice and the rest of the distribution items. The rice in Mubi comes from across the border in Cameroon. For some reason the border is closed at this time so rice is scarce and hard to find; the price is also inching up. Amos was able to buy enough rice, but he had to get it from about eight different vendors. This took a lot of extra time. By the end of the day two trucks were loaded with the food items. 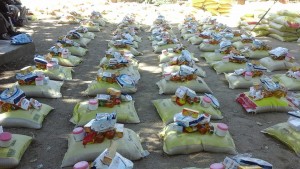 We drove almost thirty miles north of Mubi (most of it on a road that is full of potholes) arriving in the town of Michika about two hours later. The food distribution was held at the Nkaffa EYN Church. Most of the people were from the surrounding hill country. 350 families were served in the distribution. The distribution was a bit hectic, as again more people showed up than were told to come.  We still had some cooking oil and sugar left over after the rice and food was given to the 350 families, so it was left in the hands of the church pastors to give out to the rest of the people who hadn’t received anything. 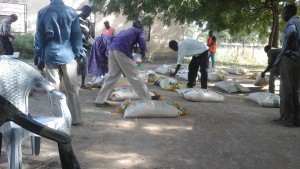 The relief team went on to an EYN Bible School outside of Michika to do a 52 family food distribution. The food was for the staff and attendees of the school. Again, there wasn’t enough food to go around. There were 66 families. The school staff said to give the food to the attendees and they would wait until next time to get their food, so that is what was done.  After the bumpy drive back we arrived in Mubi at 6pm as dusk was arriving.

It was back to the market to buy 22 bags of rice and supplies for a 22 family distribution at the T.E.E. College in Mubi, a theological school that Mission 21 is supporting. The staff were very grateful for the help given. We spent the night in the Mubi area. 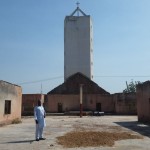 We attended worship EYN Giima Church in Mubi. The church building was burned out, with only the walls and tower still standing. A temporary building has been erected where church service is being held. The sides of the building are sheeted with the old burned tin from the church building with new tin on the roof. There were at least 500 people at the Service. After lunch we drove to Yola for the night. 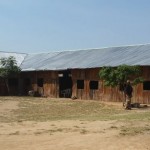 We left Yola at 6:30 am and arrived in Jos at 2 pm. It was an uneventful, although, (as usual) tiring journey.

Are you as exhausted as the relief team? And they get to do it all over this next week.