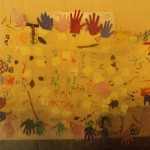 Unexpected. This word describes many of the experiences we’ve had on the Youth Peace Travel Team and the ways God works. Our week at Mardela wasn’t any different.

During our week, there were surprise blessings, such as Heather and Jacob surprising me with an “Appreciate Amanda Day” and a random dance party in the kitchen. There were also unexpected jobs, such as the day I had to help the kitchen staff chase a squirrel out of the dining hall with brooms, boxes, and air horns (don’t worry, the squirrel eventually returned to his tree safely!).

We also saw God work in unexpected ways. There were times when the campers didn’t seem to be listening. But then, during our biblical peacemaking session, they surprised us with enthusiastic participation in skits and songs. When campers shared what they had learned at camp at the Thursday night campfire, I was overjoyed when a majority of campers shared something they had learned at peace sessions.

We could also see God in the spirit of the campers. They enjoyed God’s creation while fishing and swimming. They showed the creating spirit God gives us by drawing and making bracelets. And they were joyful when we taught songs to them that we had learned at other camps.

There were ups and downs this week, but God blessed us and the campers. I think we all learned that we can expect the unexpected and God always has a plan for us.